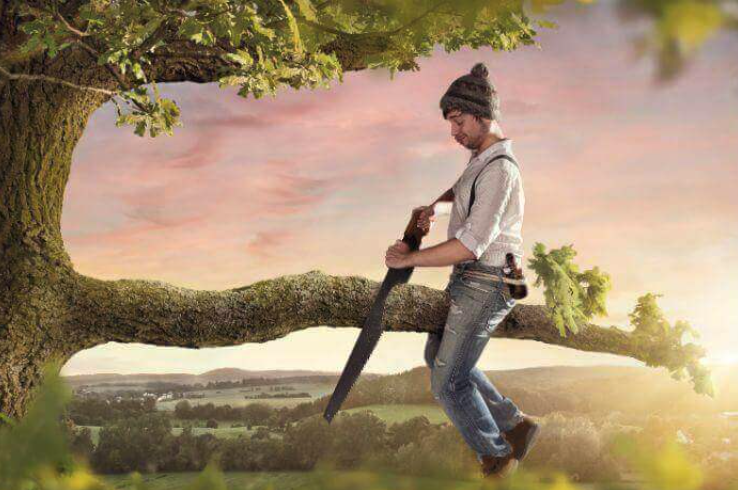 Are you trolling the best version of yourself?

It can be said that when things appear to be going great in our lives, we often anticipate the eventuality of Sod’s Law as though a duration of happiness or content must come with a contrasting downturn, impending cost or end.

Everyone wants the easy road, open doors and opportunities handed to them on a plate and yet can’t help but feel ensuing bitterness toward those living the life they desperately want for themselves, myself included. Equating the struggle, effort or burning desire for covetable means of a better life isn’t the same as taking the necessary road, kicking down the door and cultivating opportunities rather than waiting around for them. The day that I put the focus solely on myself rather than bitterness in my inadequacy was one met with all too ruthless accountability. I soon realised that the pressure I was putting on myself was way more than realistic and practical, testing my will to the breaking point just so that I could get an acquired taste for failure, working even harder as a result.

The fact of the matter is, we don’t look to people that seem to be doing better than us in search of a formula or solution, but the same very critique and brutal judgement we must first apply to ourselves if we want to facilitate significant changes or improvements to materialise. The more I act on what I think as opposed to expectations, being as subjective and honest with myself as possible, comes functional rationale, enlightenment if you will. Irrational behaviour as a result of hyper-scrutinity is what I deem to be resultant of abusing our unfulfilled need for acceptance, a conditioning that we can put to the test every time we post a picture and it doesn’t get the same engagement as the last.

For me, the most secure I am with myself is when I am taking enough action and making choices that are conducive to the kind of person I would like to look back on in 5 years time and it be bear no dissimilarity to the values and morality to which I take full ownership of. The way that I want to relate this back to self sabotage is this dichotomy of growth without critique, improvement without questioning and success without failure. I often look at old posts on Instagram or Facebook and cringe at how my perception or outlook may have changed, resentful of how I could openly protest and be so forthright with my opinion and now be so reluctant to share anything that doesn’t full epitomise the message I want to convey.

I suppose it’s different the more you mature as person and become less obsessed with gratification as you do earlier years, at the time it’s equally instinctual as it is extrinsic, reverting back to this unfulfilled need or void we are all looking to fill in one way or another. As consumers of anything and everything that is suggestive enough to our needs, how freeing would it be isolate the need from perception, opinion and critique to the most useful from the useless. Equating that which we ingest from the most benefit and least side effect. We do this every time we scroll past and ignore something that doesn’t intitally resonate or appeal to us yet could still find the same answer in that what the information wasn’t otherwise saying. Sometimes the information is right in front of our very eyes and we fail to miss the fine details, favouring common ground, unconditional acceptance that does no one any favours, a humility that equally binds our capacity or ability to be manipulated.

By watching Netflix, it means we aren’t doing something less favourable, something which you may resent or dread. It’s not the act of being in bed and watching Netflix which is so appealing, but the fact in conjunction with what you aren’t doing as a byproduct. By critiquing components of your personality all to diligently, you are also failing to quantify your worth, character and qualities. Just like our diligence with NEED from GREED, It becomes one big cycle of would you rather, rather than embracing, accepting and working on YOUR FAULTS you are insisting on letting them be used against you.

How much critique, negativity or stress facilitates this instant response for ‘Now I must take, eat or do something in order to feel better. Premature celebration as I recently mentioned in an IGTV. The same refresh button that gives us more content, news, information and entertainment is the very thing that is making our NEED for gratification more of a trigger finger than functional means of decompression. Could our brains even able to handle this constant surge of endorphins, serotonin and joy? Surely we need to feel sadness, dismay and rejection in order for us not to take more favourable Imagine sitting in front of the same episode of your favourite show, on repeat, eating a death row style meal for an entire week. Sooner or later you’d find more resentment toward the things you once enjoyed and relished. It’s often not entirely the things you are consuming, watching or enjoying that evokes, excites or stimulates this emotion, but the act or predicate of doing so.

Think less, BE MORE, epitomise your greatest identity and respect its purest form, warts and all, incapabilities and strengths. The wrong kind of noise can warp and distort it’s right for complexity and detail, but only you have the capacity to protect the process between initial idea to finished product. Be it displayed on a shelf, in your own shop or sold off on a market stall at a discounted price with a different label unbeknownst to your approval. People will choose to sabotage and discredit you if it means putting themselves above you and justifying their own imposed inferiority. If you cultivate a big enough label, name or reputation for yourself, you won’t need anyone else to do it for you. The same can be said for criticism, if you already have enough on your plate, don’t add even more fuel to the fire for the sake of testing your willpower. Be realistic. This might be fine for a day when you have the energy to put up a fight, but on one when you feel vulnerable or tired, the only result you can count on is burning out.

Self-sabotage, coming FROM you, and criticism, everything AROUND you can be overwhelming, which doe you listen to the most and what do you deem more important between the two? This pendulum swing of positive critique and all else that poses to negate your perception of progress, identity or purpose is the kryptonite of our creativity, freedom and happiness. Embracing one is a means of requirement to the other, tough love, reality checks and bringing down a peg or two are determiners which can either provoke change or block it.

Be realistic with yourself, acknowledge feelings of inferiority as a means to be better rather than perceiving them with resentment.

Have a great day,